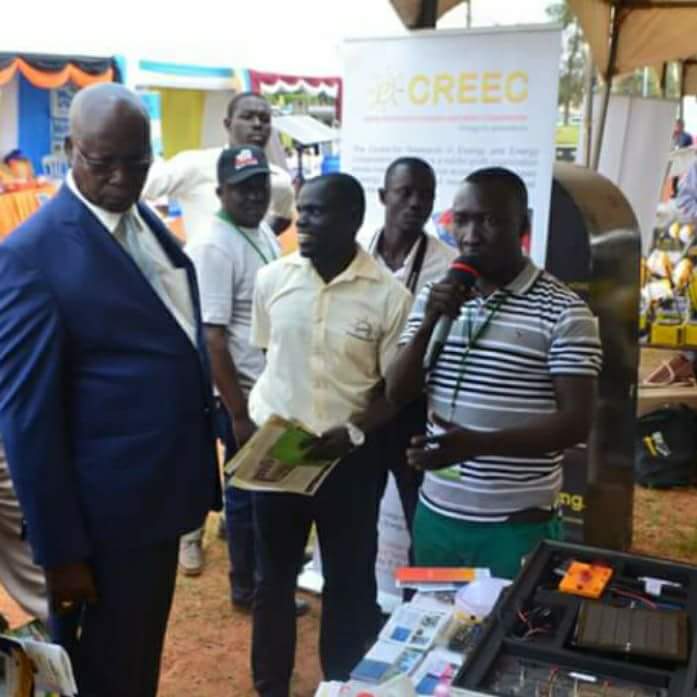 CREEC PARTICIPATES IN THE 2017 ENERGY WEEK. Minister of State for Energy, Honorable Minister Simon D”Ujanga during the exhibition.

From 11th to 16th September, CREEC took part in the energy week organised by the Ministry for energy and Mineral Development. This was under the theme, ‘Access to clean Energy, a bridge to sustainable Development. The Centre for Research in Energy and Energy Conservation (CREEC) alongside other companies dealing in Solar, Bio Gas and Cooking stoves had the chance to exhibit and showcase what they had in stock for the public.

CREEC sensitized people about the significance of testing services in bio energy and solar PV in the industry during this year’s exhibition. The Centre promoted services offered in testing laboratories of, stoves_Regional Testing and Knowledge centre and Solar PV.

Monday 11th September 2017, the Energy week kicked off in high gear as most of the exhibitors flogged the KCCA grounds looking for strategic positions in which to Exhibit. The Army band ushered in the State Minister for Energy, Hon Minister Simon D”Ujanga who moved alongside with him a number of important Government officials and Members of Parliament. Among these was Hon Eng Irene Muloni, Minister of Energy and Mineral Development.The State Minister For energy toured all tents and among those was the CREEC tent. A number of things were explained and as explanations were on going, the minister picked interest in the activities done at CREEC. Special thanks goes to the Ministry for energy and Mineral Development for organizing such an informative and educative energy week. Later in the week, the Honorable Minister for Kampala, Honorable Minister Betty Olive Namisango Kamya was also seen visiting some of the stalls. The Centre for Research in Energy and Energy Conservation is not for profit Organization whose mission is to enhance access to modern types of energy through applied research, training and Consultancy in East Africa.

Some of the participants in this year’s exhibition included among others, UMEME, REA, ERA, Ultra Tec, Awamu Bio-energy Ltd, Oil Libya, GIZ, Davis and Shirtliff and other private sector organisations.