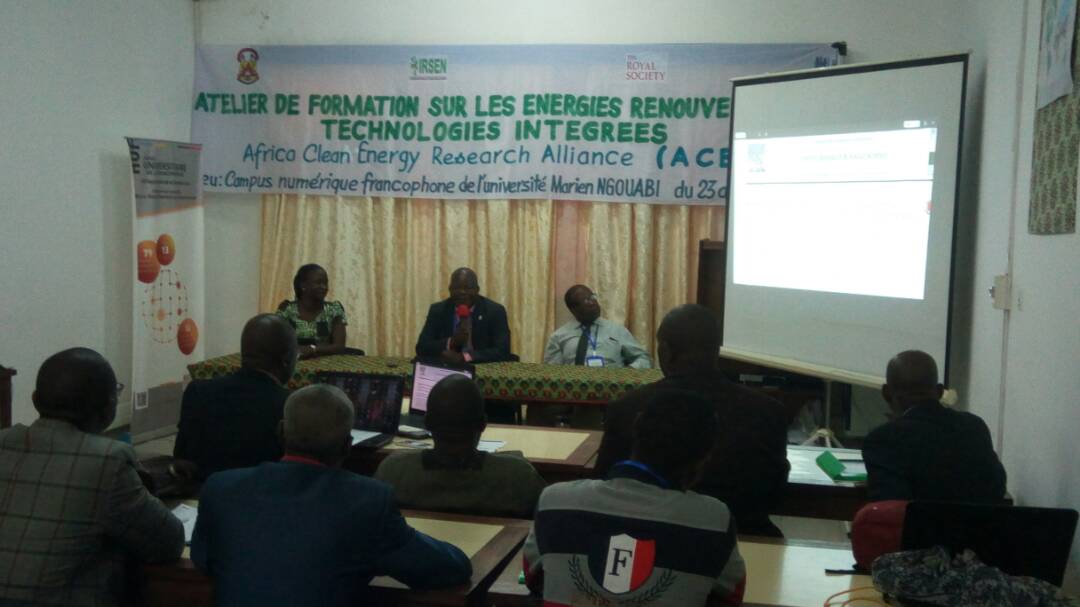 CREEC’s Eileen Lara during a training session in Congo Brazzaville

As part of the initial Royal Society –DFID capacity building initiative ACERA network activities, a capacity assessment of four sub-Saharan African universities was carried out in a series of workshops attended by the consortium partners. The capacity assessment was based on the methodology developed by Bates et al. (2011) and identified common functional capacity deficits in their renewable energy PhD programmes (Colenbrander et al. 2015): Below were a few deficits identified:

However, this cross-institutional comparison also highlighted low- or no-cost capacity-building strategies that are being piloted within the four universities, including joint supervision policies, weekly seminar programmes, the establishment of specialist centres to engage stakeholders and the introduction of internal monitoring processes. The training programme that was proposed was to build on the strengths identified in the workshops and aim to rectify the deficits.

Earlier this year, the Centre for Research in Energy and Energy Conservation kicked off with the DFID project implementation. CREEC together with the University of LEEDS, Dar-es Salaam institute of Technology and Universite Marien Ngouabi Congo Brazzaville agreed that there would be a number of trainings periodically. In addition to the trainings, students and staff would come together, three months every year for training at the consortium partners.

It was also agreed that the proposed research programme would include training of a vocational nature given by the Centre for Research in Energy and Energy Conservation (CREEC). These short courses (one to four days) would cover both technical and entrepreneurial aspects and they would draw on existing vocational training offered by CREEC. The trainings would be expanded to include expertise from the consortium partners to create a sustainable set of courses that can be offered to non-consortium members at African institutions, NGOs, government and the private sector both within CREEC and at the consortium partners using the material developed.

It is on that note that the Africa Clean Energy Research Alliance (ACERA) project funded by the Royal Society-DFID Africa Capacity Building Initiative together with the Universite Marien Ngouabi, Congo Brazzaville, organised a five days training in renewable energies and energy technologies. This training was an implementation of what was earlier on agreed upon by the different partners.

This was yet the third and the last training this year as there have been similar trainings at different dates in different countries. The first of the trainings was held in the CEDAT auditorium starting 28th -30th June 2017, the most concluded one was at Dare-es Salaam Institute of technology from 25th to 29th September 2017 and the last one in Congo Brazzaville from 23rd to 27th November 2017.

CREEC was represented by Eileen Lara and Opio Innocent who made presentations about CREEC’s experience in Solar energy( Project implementation perspective) and the different renewable energies and energy technologies respectively. The duo made presentations alongside PhD students from different Universities across the globe.